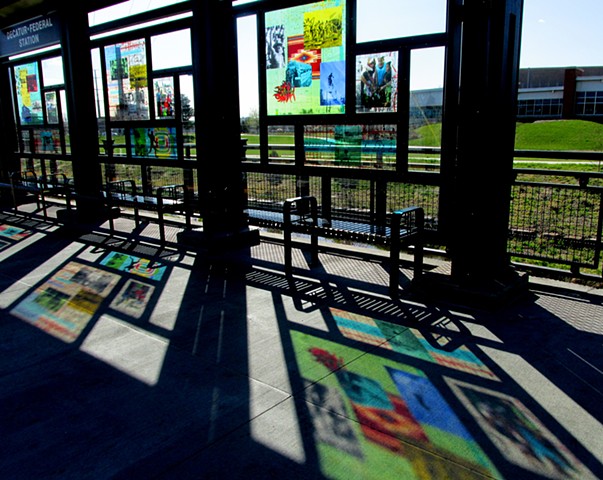 The triple panels are about aspirations, past and present, and the cultural diversity of the neighborhood. The single windscreen at this station is about the area around Barnum Lake. 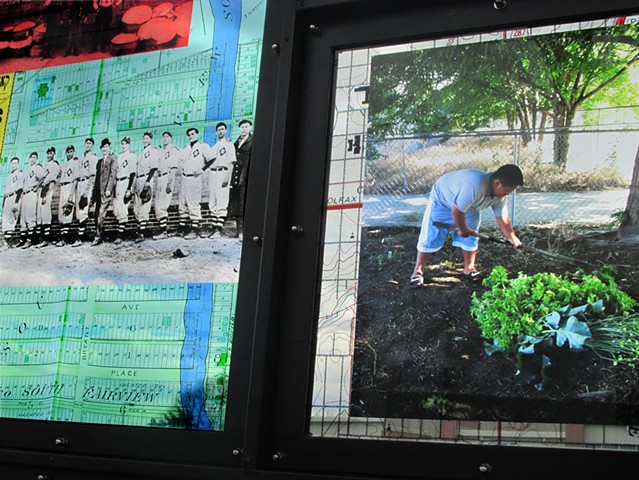 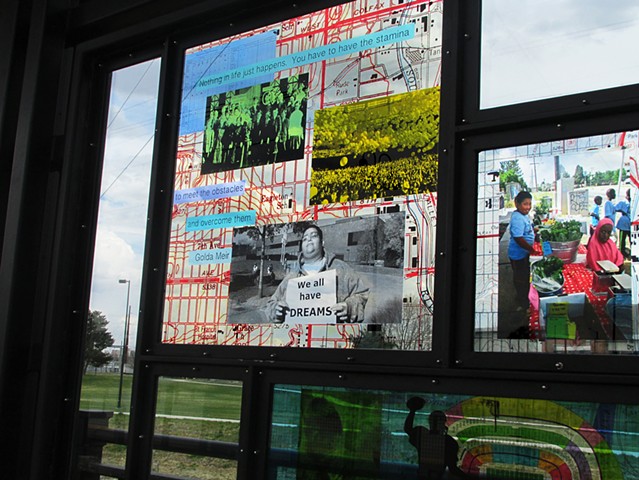 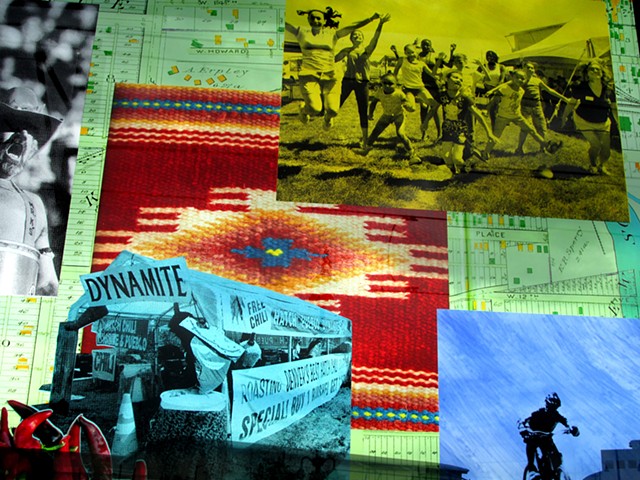 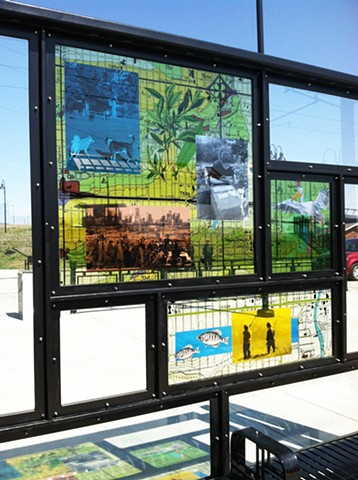 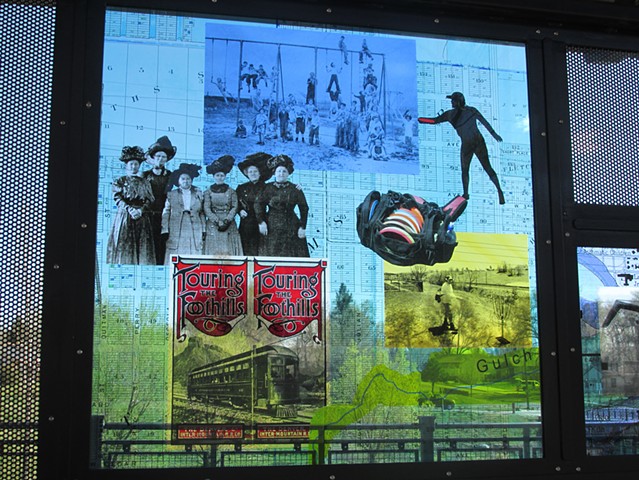 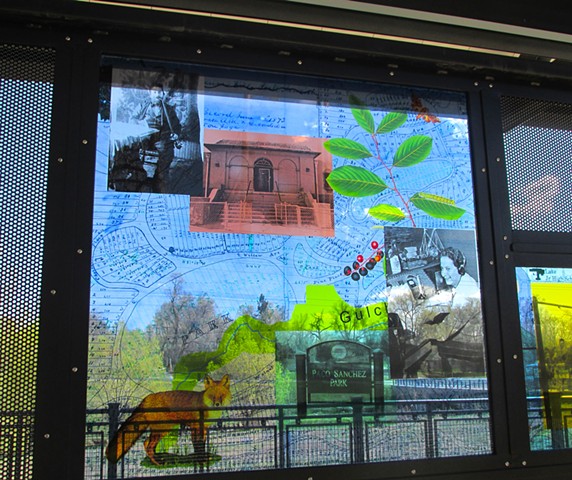 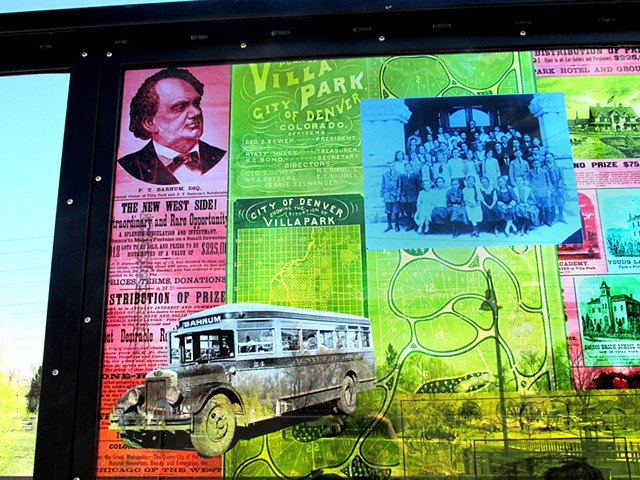 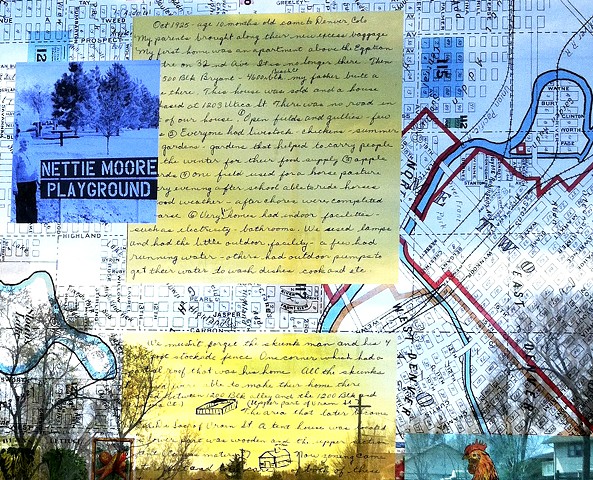 Perry Station has 4 windscreens. This detail features Nettie Moore manuscript talking about the early days growing up near Perry Station.

Nettie Moore material is from Denver Public Library with permission from Nettie Moore. 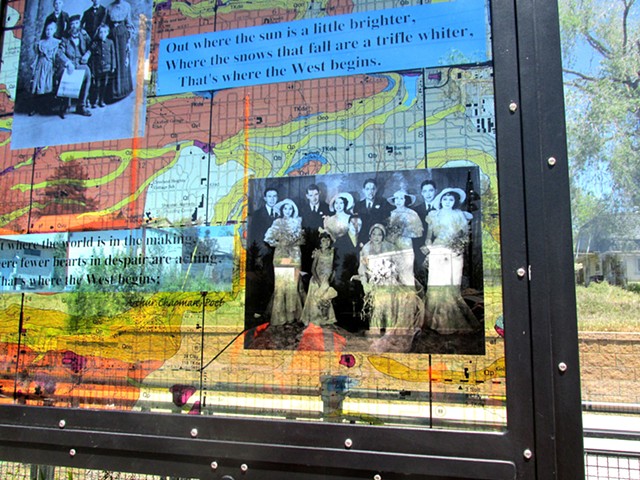 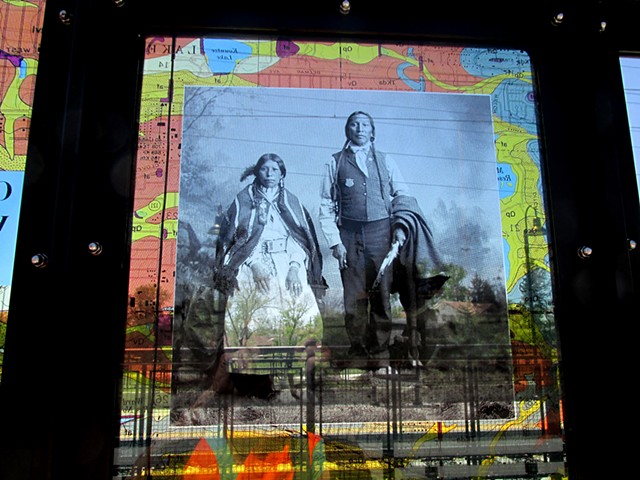 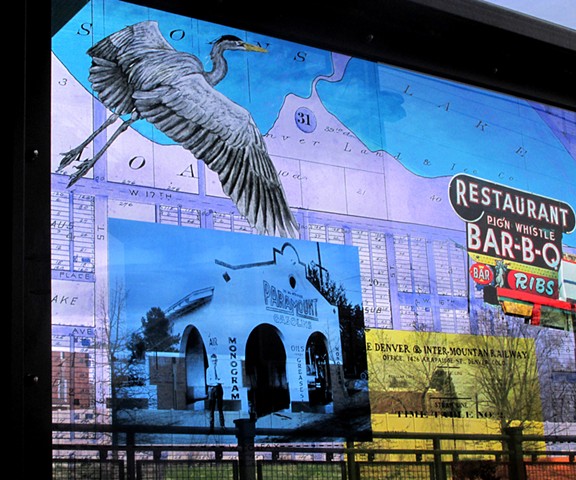 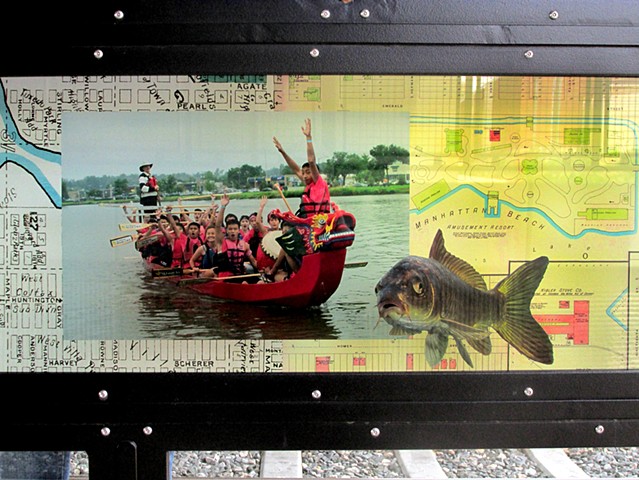 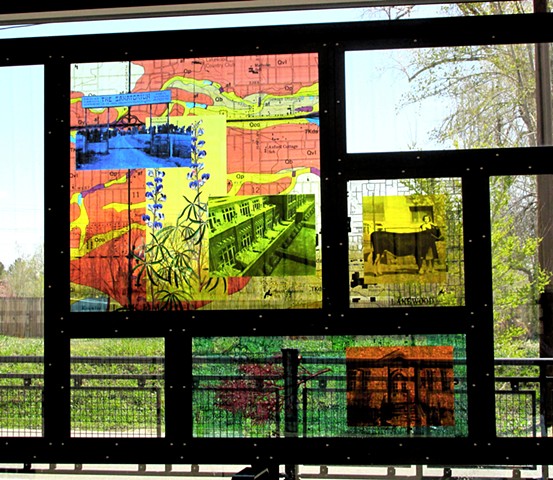 Three windscreens at this station, with lots of historic imagery and natural features. 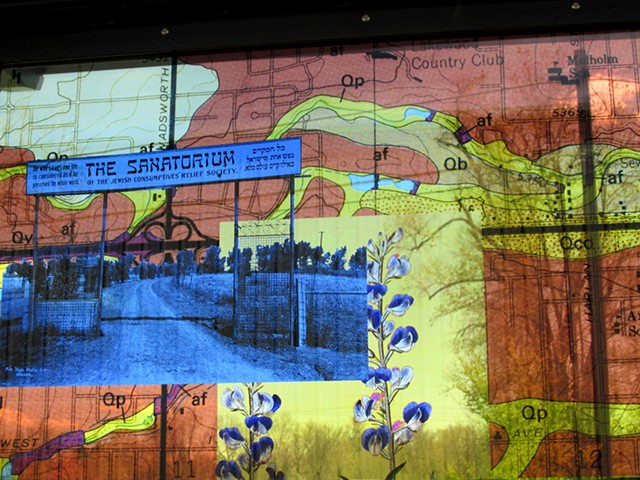 Detail with Jewish Consumptives' Relief Society. More people came to Colorado for treatment of respiratory diseases than for the gold rush. Beck Archives, U. of Denver. 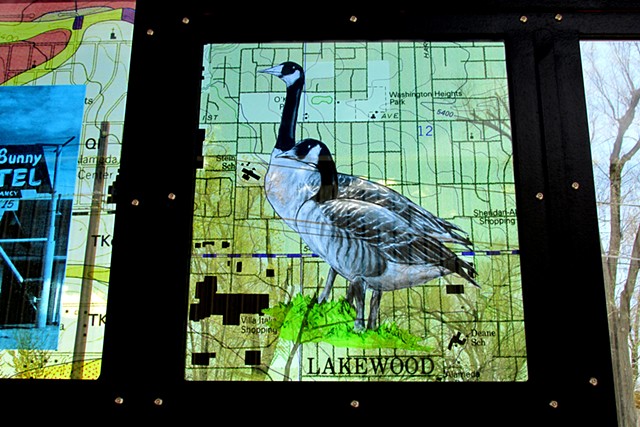 Lamar, lots of geese in the area 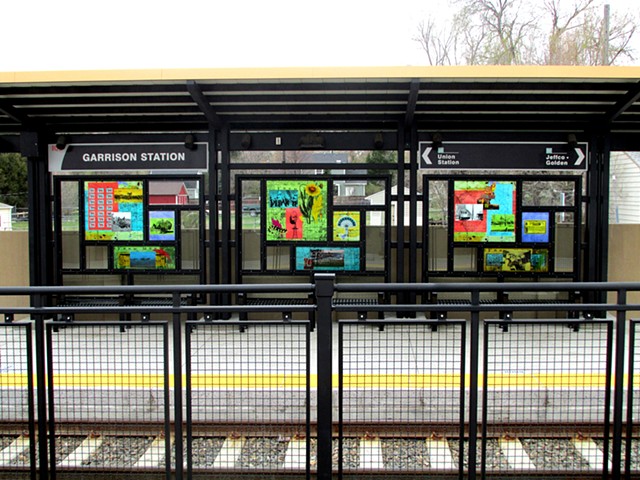 Three windscreens dealing with agricultural history of the area, and other local cultural and natural history 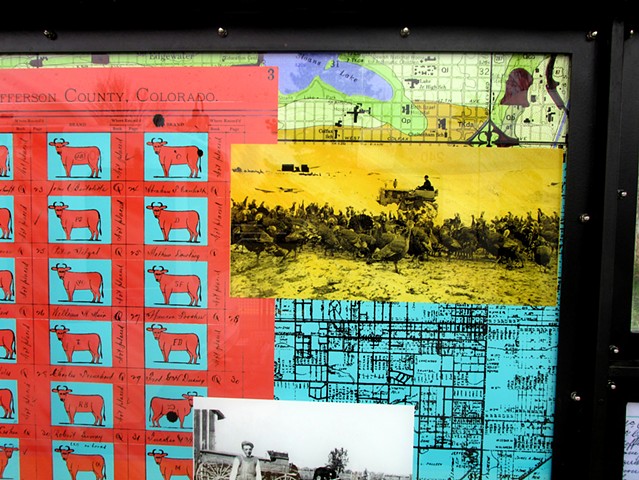 Detail from the Jefferson County Archives, a page from Livestock Brand Registry book from 1877 – 1899. Photo of turkey farm in snow, Lakewood Heritage Center. 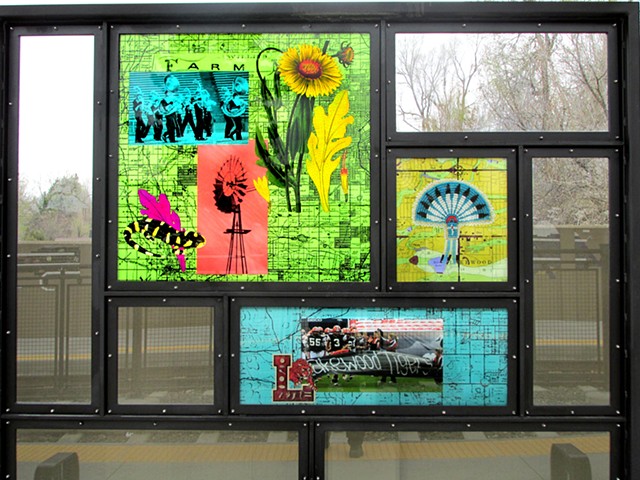 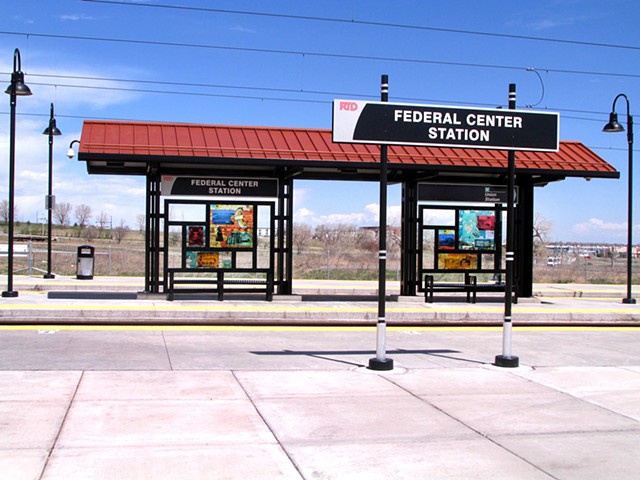 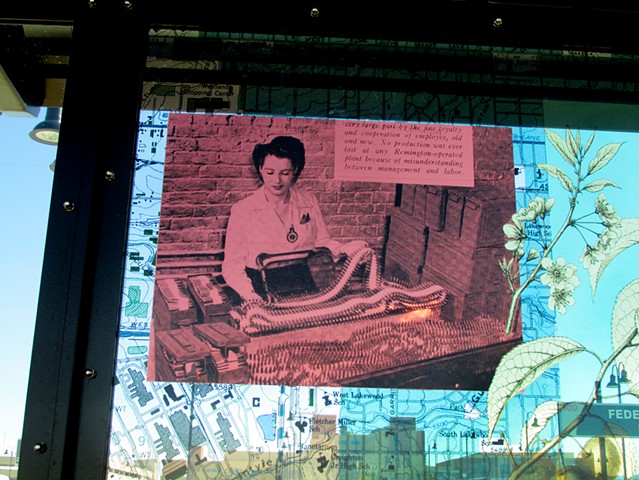 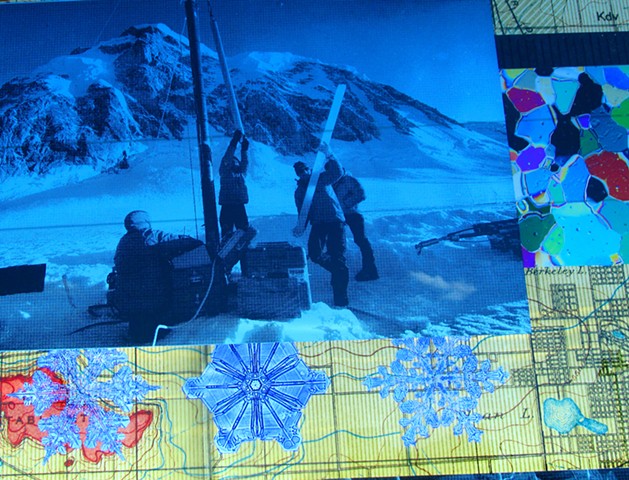 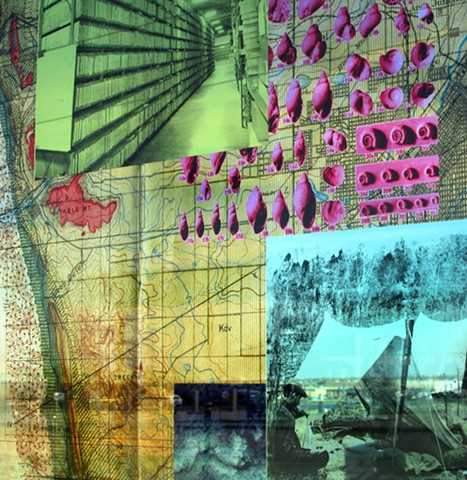 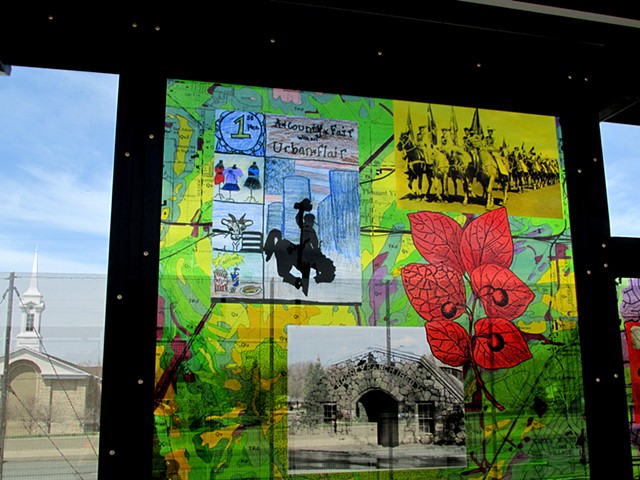 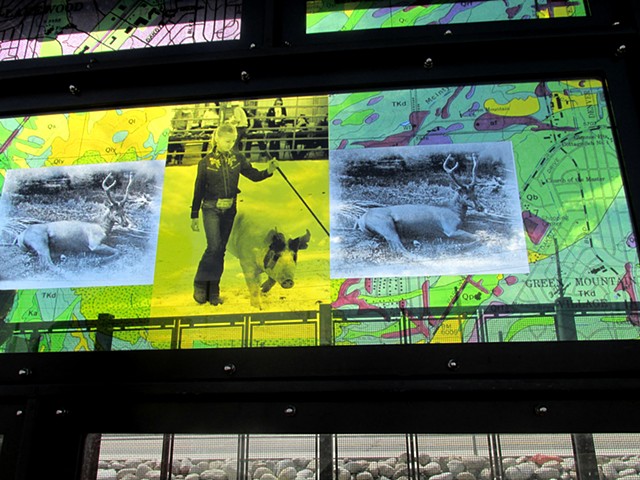 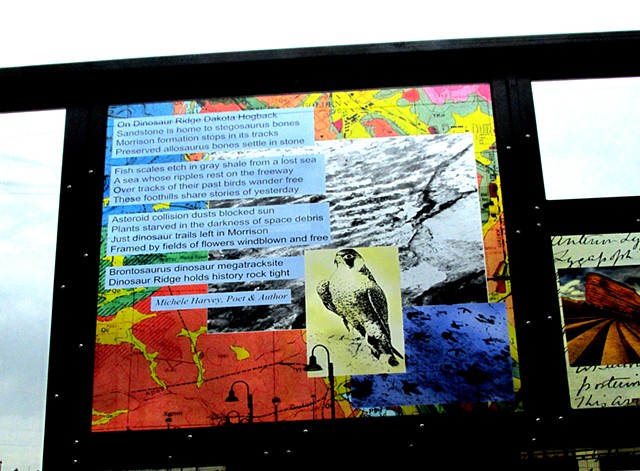 Three windscreens about Golden’s history, including gold mining and the discovery of dinosaur fossils. "Dinosaur Ridge" by Michele Harvey 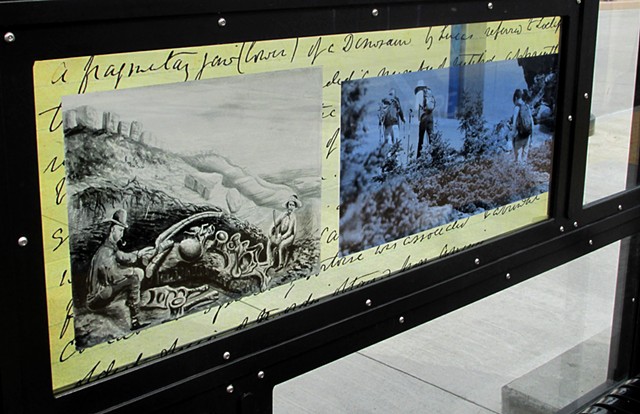 Jeffco-Golden, detail with Arthur Lakes field notes and watercolor of paleontologists at work 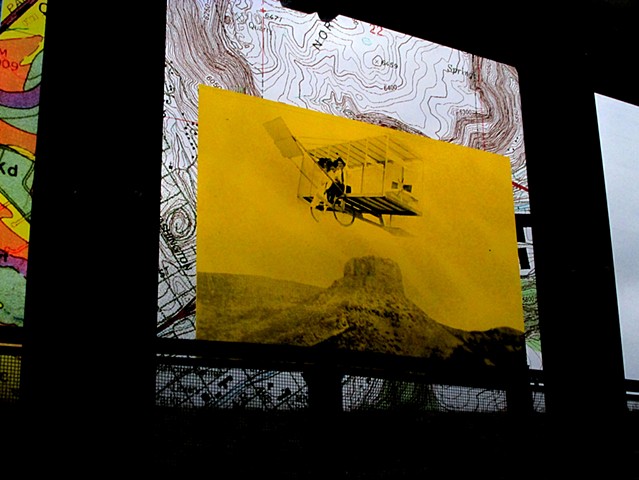 In 2013 I was commissioned by the Regional Transportation District (RTD) based in Denver, Colorado to design, fabricate and install windscreen art for nine of the new West Rail Line stations, a stretch of about 12 miles. There are 28 windscreens in all. A group of three panels is approximately 5’h x 30’w x ½”d.

These stations pass through a range of neighborhoods, from urban Denver, right near the Mile High Sports Arena, through West Denver with its strong ethnic history, from Orthodox Jewish to Mexican, Somalian and Vietnamese, into Lakewood with its agricultural past, and on into Golden, a former gold rush town, in the foothills of the Rockies.

Golden is also the site of dinosaur discoveries, and I tracked down the handwritten field notes and drawings of Arthur Lakes, who discovered Stegosaurus. Lakewood is the home of the USGS, and it's where they process and store long cores of ice from Antarctica and other cold regions of the world. Legendary Colfax Ave. runs through my entire route and I've included the old neon signs. I've also included references to the historic trains and trolleys that traveled the same basic route, following the gulches.

I met with all sorts of people and worked with numerous archives. There's handwritten journals, disc golf, urban gardens, chile roasters, equestrians, pigs and cattle, panning for gold, and Ute, Cheyenne and Arapaho artifacts. There's history and culture, site-specific flora and fauna, plus poetry and prose -- a strong sense of place, highlighted by my use of a wide variety of local maps.

The panels are made out of tempered and laminated float glass. Most of the photos and the other black material (e.g. text) are silkscreened and fired onto the back of the glass and are permanent. The color is on an interlayer film that is sandwiched between two layers of UV blocking laminating film, all between the glass layers. The fabricator was the Kaiser/vonRoenn Studio of Tallahassee, FL.

I thank all of my sources, without whom this project could not have happened. Special thanks to my husband/partner/photographer/installer, Jim O'Neil, to my graphics assistant, Britt Melancon, and to my photographer and liaison on the ground in Denver, Daniel Salazar.